Just seems to me that you should get an accurate reproduction with a 3d scanner doncha think?

In the animated gif here the scanned image looks just plain different than the actual object. The stone texture is completely missing and the details on the elbows are just obscured. Sure the image is flipped but the chips in the nose are rounded.  Is this just a bad scan or is this the norm for entry level scanners? Unfortunately, I’m finding its the new status quo. I reiterate…blah!

There is no doubt that 3d scanners are amazing devices. In fact, I believe that the 3d scanner represents more of a milestone than the 3d printer just based on the shear amount of research and thought behind the math and application. However, new 3d scanners that have hit the market represent no more than toys or hobby based devices rather than scientific measuring devices.

Look, these new scanners are akin to the radio shack electronic science kits rather than metrology devices.

The hugely hyped Makerbot Digitizer seems to be very sensitive to motion and seems  to go out of calibration and needs more frequent recalibrations. MakerBot’s instructions call for re-calibrating every 20 scans or once a week, however, People suggest that it seldom goes past 10 scans or a few days. I believe this is due to its less than robust construction. It’s resolution comes nowhere near professional based systems. Here is a comparative image using this scanner: 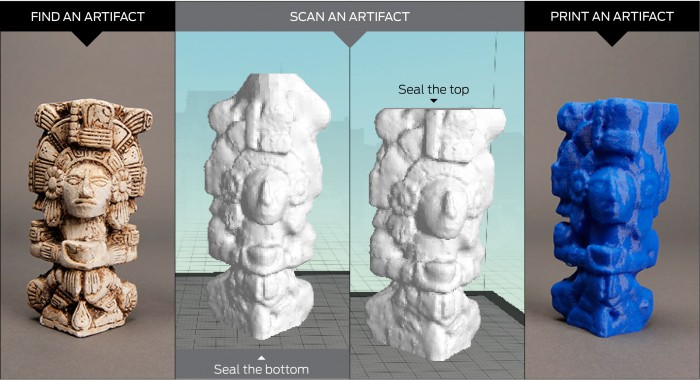 Please note the details in the object’s head dress. They are not detailed in the scan.

The Nextengine scanner is also a hobby scanner not only based on it’s mediocre resolution but also it’s acquisition speed. It is sloooooowwww, slow! So much in fact that at a RAPID convention in Anaheim I witness the NextEngine booth actually “simulating” real-time scans. They had an object on a rotating turntable and a video playing of a scan on the monitor. The only problem was the scanner itself was not on and there was no laser shining. I’ve seen single view scans on Nextengines take close to 2 minutes! Imagine if you would like to take a full 360deg scan of an object with multiple views. I’ve compared them with others and I’m debating on doing a blog post with my side by side comparison. I believe their HD scanners have a sample pitch of .4mm. I also hear anecdotal reviews that say stitching items larger than their suggested volumes result in gaps. That makes me think that their factory calibration needs improvement. I commend their support structure though. I hear great things about that. I also think that Nextengine took great strides in making 3d scanning approachable to  the public. Unfortunately, that’s all I’ve been impressed with. Sorry.

I’ve also seen scanners wrap their low resolution 3d model with high resolution image maps and masquerade those as great scans. This often happens with many of the photogrammetry solutions that are available today. The other thing manufacturers do is quote camera resolution and not scanning resolution or sample pitch. Sample pitch is the distance between acquisition points. For instance a .5mm sample pitch means that a scanner acquires a point off an object in an approximate .5mm grid. Details that fall in between those sample points are not duplicated faithfully.

The truth is, has always been, and continues to be (much to our shock) you get what you pay for. I know it sounds like I am being overly pessimistic but just like the entry level 3d printing systems these entry level 3d scanners are spreading the industry out and not up. I want to see the limits pushed more.

I see vfx and digital manufacturing companies relying and competing in the market with hobby scanning systems. You may say “if they are competing with companies that have more expensive scanners then who cares?”  I ask you back though; are they lowering the bar for the industry as a whole? Who would  pay to eat at a 5 star restaurant when there are so many McDonalds arounding touting their gourmet burgers as comparable? In reality they are not.

I think we as 3d scanning bureaus are not selling our jobs and systems well enough.

There are shining stars in the mid range though. ThreeRivers 3D has an excellent system that is rebranded as the Virtuoso. Get this! It works on Mac based systems too! The standard version of the ThreeRivers 3D system scans at 50 micron resolution and as quick as 4 secs for a single view. They tell me that they are making great strides and I anticipate amazing things from this company. I’ve scanned items on this system that were similar in result as machines that were 10x it’s price. In full disclosure, that’s why I agreed to sell their systems. But to be honest, I’d sell and recommend any system that works well. For instance, David Scanners have demonstrated better results than the Nextengine or Makerbot systems if they are properly prepared. I don’t sell those though.